The below opinion piece was published in The Medwire, a student magazine I worked for while studying at the University of Kent’s Centre for Journalism.  Its focus was on how to improve the relatively young Universities at Medway Campus, of which I was a student officer at the time. Read the opinion piece in its original magazine layout (by myself) over here, or in text format below. 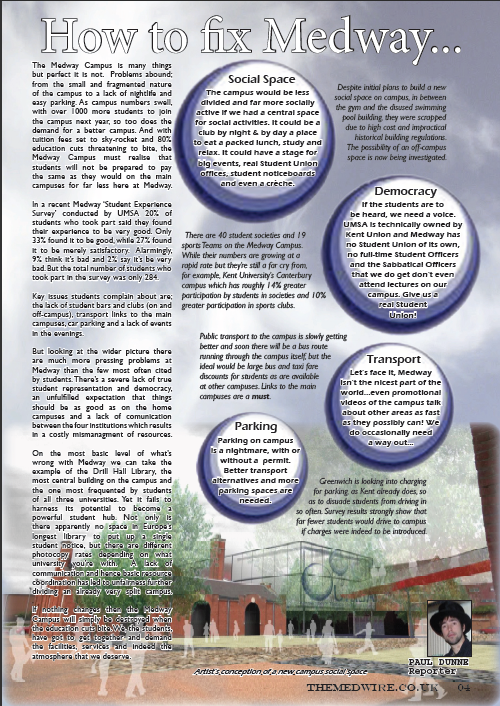 The Medway Campus is many things but perfect it is not. Problems abound, from the small and fragmented nature of the campus to a lack of nightlife and easy parking. As campus numbers swell, with over 1000 more students to join the campus next year, so too does the demand for a better campus. And with tuition fees set to sky-rocket and 80% education cuts threatening to bite, the Medway Campus must realise that students will not be prepared to pay the same as they would on the main campuses for far less here at Medway.

In a recent Medway ‘Student Experience Survey’ conducted by UMSA 20% of students who took part said they found their experience to be very good. Only 33% found it to be good, while 27% found it to be merely satisfactory. Alarmingly, 9% think it’s bad and 2% say it’s be very bad. But the total number of students who took part in the survey was only 284.

Key issues students complain about are; the lack of student bars and clubs (on and off-campus), transport links to the main campuses, car parking and a lack of events in the evenings.

But looking at the wider picture there are much more pressing problems at Medway than the few most often cited by students. There’s a severe lack of true student representation and democracy, an unfulfilled expectation that things should be as good as on the home campuses and a lack of comunication between the four institutions which results in a costly mismanagment of resources.

On the most basic level of what’s wrong with Medway we can take the example of the Drill Hall Library, the most central building on the campus and the one most frequented by students of all three universities. Yet it fails to harness its potential to become a powerful student hub. Not only is there apparently no space in Europe’s longest library to put up a single student notice, but there are different photocopy rates depending on what university you’re with. A lack of communication and hence basic resource coordination has led to unfairness further dividing an already very split campus.

If nothing changes then the Medway Campus will simply be destroyed when the education cuts bite. We, the students, have got to get together and demand the facilities, services and indeed the atmosphere that we deserve.

Despite initial plans to build a new social space on campus, in between the gym and the disused swimming pool building, they were scrapped due to high cost and impractical historical building regulations. The possibility of an off-campus space is now being investigated.

The campus would be less divided and far more socially active if we had a central space for social activities. It could be a club by night & by day a place to eat a packed lunch, study and relax. It could have a stage for big events, real Student Union offices, student noticeboards and even a crèche.

If the students are to be heard, we need a voice. UMSA is technically owned by Kent Union and Medway has no Student Union of its own, no full-time Student Officers and the Sabbatical Officers that we do get don’t even attend lectures on our campus. Give us a real Student Union!

Let’s face it, Medway isn’t the nicest part of the world…even promotional videos of the campus talk about other areas as fast as they possibly can! We do occasionally need a way out…

Public transport to the campus is slowly getting better and soon there will be a bus route running through the campus itself, but the ideal would be large bus and taxi fare discounts for students as are available at other campuses. Links to the main campuses are a must.

Parking on campus is a nightmare, with or without a permit. Better transport alternatives and more parking spaces are needed.

Greenwich is looking into charging for parking, as Kent already does, so as to disuade students from driving in so often. Survey results strongly show that far fewer students would drive to campus if charges were indeed to be introduced.