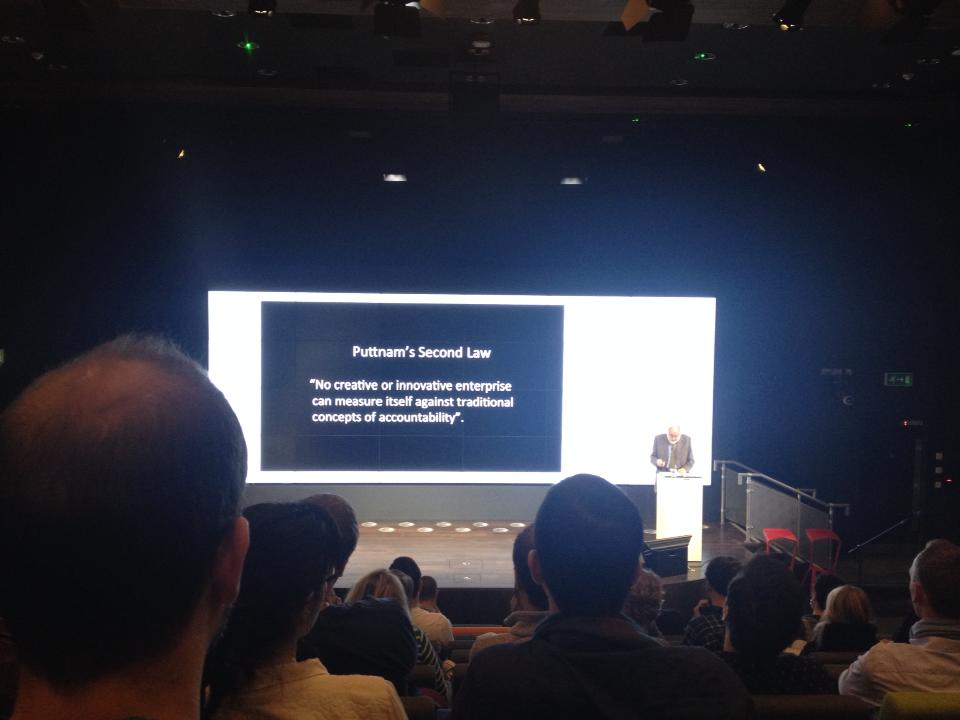 When I heard Lord Puttnam was to give a lecture at Google I wondered if I would like him, knowing as I did the chilling effect he had almost had on free speech as a Labour Peer in the UK’s House of Lords (read more on that here). But he came to Google Dublin in his role of Ireland’s Digital Champion and gave an absolutely fascinating and thoroughly enjoyable talk about creative leadership.

Until the talk I hadn’t realised Lord Puttnam was also the oscar-winning movie producer behind films such as The Killing Fields, Chariots of Fire and Bugsy Malone (which I still remember watching as a kid).

Drawing upon experiences from his career in both the  movie and advertising industries, Puttnam outlined his five laws of creative leadership, which are all excellent and could equally apply to journalism. Here’s my take on them:

Something I found particularly true when studying journalism: any piece of work I’ve been really proud of went through numerous edits and revisions, sometimes being completely rewritten in the process. When you eventually do finish something like this you realise just how crap the first version was and have to grudgingly admit your lecturers were right all along.

Definitely one to remember as newspapers move further and further away from traditional print advertising models. When you’re in a rapidly changing industry  old measurements of success go out the window because you simply don’t know what’s going to happen. Puttnam quoted Larry Summers, saying:  “Change tends to take far longer than you expect, but when it does occur, it happens faster than you ever believed possible.” Though Summers was talking about the economy, he also perfectly describes the disruptive power of the internet on industries such as film and journalism.

Sound networking advice whatever way you read it, but perhaps even more so when we consider how audiences are now a key part of the creative relationship online. Whether through comment posting, social sharing or crowd-sourcing, audiences are no longer passive consumers but active participants. Content producers who don’t afford them the trust and respect they deserve will soon find they have gone elsewhere.

This one speaks for itself.

Just look at Twitter as a testament of the power of online sharing. If used properly, blogging and social networks are a great way for journalists to connect more directly with their audiences. It’s also a superb way for them to build trust, get some constructive criticism and even find some new story leads. I guess that’s all part of what I’m trying to do this with this blog!

Find out what I disagreed with Lord Puttnam on over here!

You can read a full version of an almost identical speech Lord Puttnam gave on his creative laws over here on his official website.